Posted by VVM Employees Association at 00:41 No comments:

Posted by VVM Employees Association at 23:50 No comments: 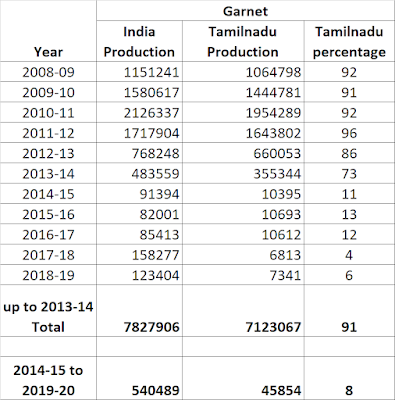 Source : From Indian Mineral Year book published by Ministry of Mines.
Posted by VVM Employees Association at 00:19 No comments:

As per the section 4(1A) of Mines and Minerals (Development and Regulation) Act, 1957, “[No person shall transport or store or cause to be transported or stored any mineral otherwise that in accordance with the provisions of this Act and rules made thereunder]”.

The Hon’ble High Court  has clearly mandates in para 10 of the Judgement that, “Thus, when the partition deed is rightly executed by all,  the same is valid and the question of cancellation of the same also does not arise.”

The Hon’ble High Court further mentioned in its judgement in para 16,

“in the case on hand, after arriving at the settlement all the parties have signed the partition deed which is not in dispute”.

It also observed in 19th para that, if at all the same to be challenged, the same can be done only before the Civil Court and not by invoking Section 11 or 9 of A & C Act. 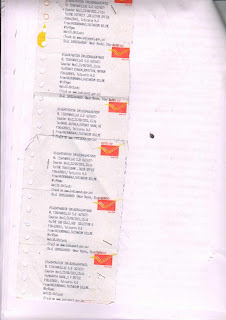 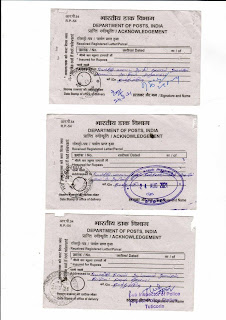 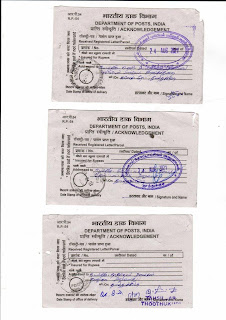 Posted by VVM Employees Association at 00:47 No comments:

Deccan Chronicle Published the news that, the premature termination order issued by Joint Secretary of MOM affects more than one lakh people jobless in Tamilnadu, Andhra and Maharastra. In Tamilnadu alone around 50,000 workers affected and this order has pushed back India one of the leading beach mineral miner and exporter in the world, giving space to China.
Thank to Deccan Chronicle for bring the fact to the world.
For More: http://epaper.deccanchronicle.com/epaper_main.aspx#2498851

Posted by VVM Employees Association at 23:14 No comments:

All over India, in a Single order by Joint Secretary of Ministry of Mines, all the private mining leases were terminated. In Tamilnadu alone it affect more than Fifty thousand (50,000) employees life and huge revenue loss to our nation. Total 15% of the export cargo of Tuticorin Port is Beach Minerals. Because of  Ministry of Mines order, Tuticorin Port Export Cargo 15% reduced.  Our nation loss more than three thousand Crore Rupees (Rs.3000 Cr) per year foreign exchange by way of export stoppage and three hundred crore rupees (Rs.300 Cr.) by way of export duty and Rs. 840 Crore loss by way of GST.

By Explaining all the above facts, our parent association Southern Region Mines and Mineral based workers welfare Association requested the Honourable Prime Minister and others to withdraw the premature termination order passed by Mines Joint Secretary. Copy of letter posted below for information. 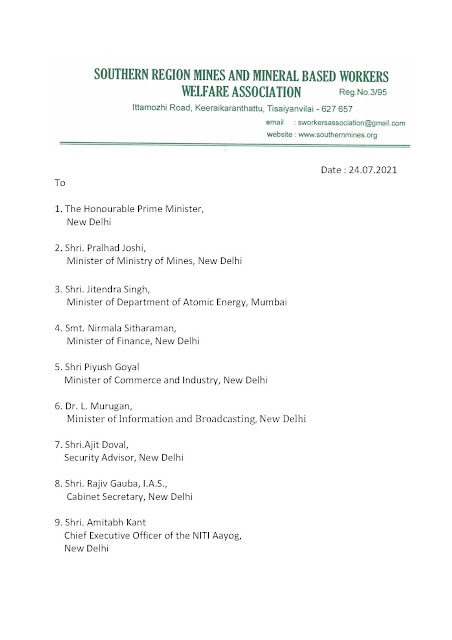 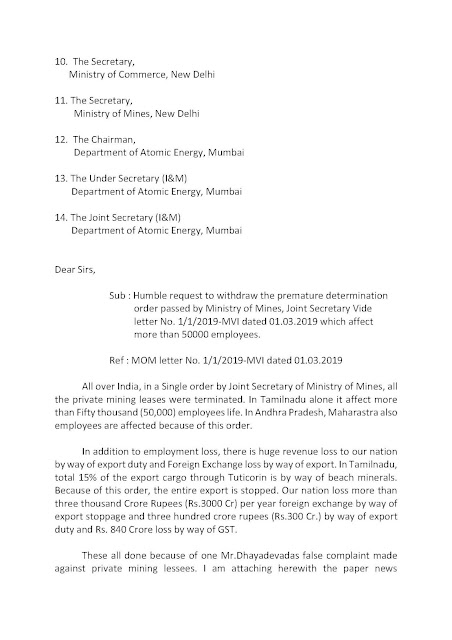 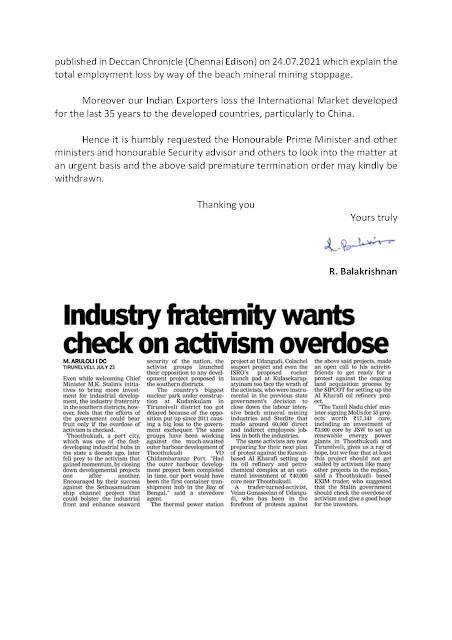 Posted by VVM Employees Association at 00:15 No comments:

In Tuticorin stoppage of  Beach Mineral Mining as well as Sterlite affect more than 60,000 Employees. In Beach Mineral mining alone 50,000 employees affected. The State Govt., should consider this for the development of our state. Thanks to Deccan Chronicle. 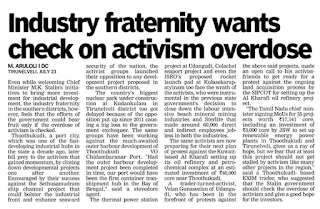 Posted by VVM Employees Association at 01:03 No comments:

Comments and Suggestions for the Proposed Draft Minerals (Other than Atomic and Hydro-Carbons Energy Minerals) Concession Amendment Rules, 2021 by VV Minerals

Sub :    The Comments and Suggestions on the Proposed Draft Minerals (Other than Atomic and Hydro-Carbons Energy Minerals) Concession Amendment Rules, 2021 – Reg.

Hence, we kindly requested that the above comments & suggestions may be forwarded to the Ministry of Mines accordingly.

Posted by VVM Employees Association at 23:37 No comments:

Request to take action against Dhayadevadas for not hand over Atomic Minerals to IREL and for illegally export radioactive monazite and for stealing Rs. 4000 Crore worth govt., seized minerals

Though Mr. D.Dhayadevadas accept Monazite and other atomic mineral content in his approved mining plan, he did not hand over the same according to the condition. But it may be illegally exported to other countries. The Govt., seized mineral 12 lakhs M.ton also sold by him illegally. Though Government directed the District Collector and Police for safe custody, due to his political power, he keep all the material without custody and illegally sold. No one is ready to take action against him due to his political power.
So we submit complaint to the Honourable Prime Minister, Home Minister and others to take action against him. The copy of complaint is given below .

Ministry of Mines, Govt., of India,

Minister of Commerce and Industry Minister,

Secretary to Govt., of India, Ministry of Mines

Ministry of Commerce and Industry

Joint Secretary to Govt., of India,

And all other Head of the department officials

Sub : Request to take action for not surrendering

Atomic Mineral Ilmenite from their existing mining leases and for involved Illegal mining.

Mr. Dhayadevadas is Political PA to the Ex. Congress Minister Dhanuskodi Aadhitan. The first directors of the company Indian Garnet Sand company, Registration No. 18315 of 1989 from Registrar of Companies Chennai, CIN No.
U14292TN1989PTC018315. 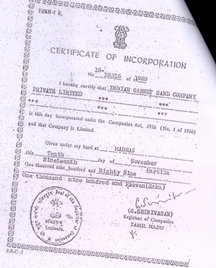 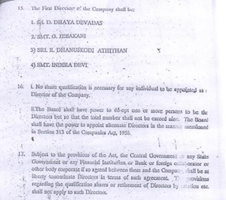 They have involved large scale illegal mining. Their mining lease contain atomic minerals including monazite. The mining plan approved by Govt., of India vide IBM RCM Chennai letter No. TN/TCR/MP/GNT-1428-Mds dated 02.05.2002 page 2 contains the above facts which is reproduced below. 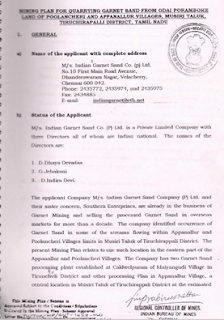 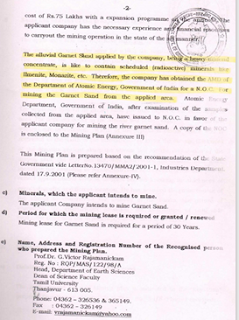 Though they have obtained clearance from AMD with a condition to hand over atomic minerals to IREL, they did not hand over the radioactive mineral to the authorities till date. In addition to, they have involved illegal mining, a tune of 3.9 Million M.Tons. Govt., of Tamilnadu has take action and issued direction to the District Collector, Trichy to keep the seized 14 lakhs M.Ton separately with police custody. 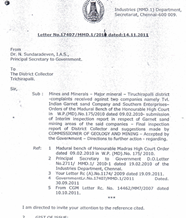 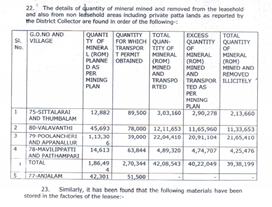 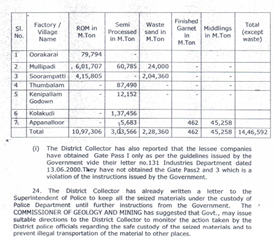 But with the help of political power in Congress Government, Dhayadevadas managed to keep the 14 lakhs M.Ton within his factory premises even without Revenue or Police officials panthopasthu. So he could able to illegally sold more than 12 lakhs M.Tons even after the seizer. When the inspection was in the presence of the lessee, his manager, his advocate and measurement was taken in their presence and videographed, it is Mr.Dhayadevadas who stolen the seized material. So, our Government lose more than Rs.4,000 Crore revenue loss, in addition to they have illegally smuggled and illegally exported the radioactive mineral monazite to China, North Korea etc., countries. 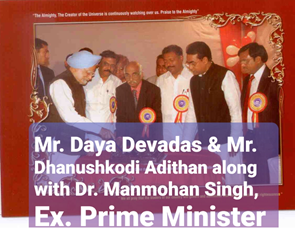 Even authorities also afraid of to take action against him. The higher officials of AMD were appointed by congress government only by his recommendation. Hence  Atomic Minerals Directorate for Exploration and Research (AMDER), Hyderabad did not take any action against this culprit for stealing government property worth Rs. 4,000 Crore and for illegal export of radioactive mineral monazite.

Posted by VVM Employees Association at 23:22 No comments: